Alex has a new pair of friends:  Our new washer and dryer. 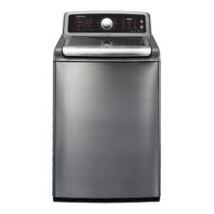 However, we had a challenge getting everything hooked up yesterday.  We did not realize that the dryer needed a water hose attachment.  Since when do dryers need water?  Well, this one does.  Apparently, it has a steam setting….

So, we went to Home Depot to find the”Y” connector and the stainless steel hoses that were recommended.

Of course, Home Depot didn’t have the “Y” adaptor.  The hoses were only 5′ lengths. We bought the hoses.  We then tried Canadian Tire.  Again, out of stock.  Who the heck is buying all the “Y” adaptors in Surrey???
So, off to Lowe’s, in New Westminster we went.  Found the “Y” adaptor.  Found the hoses.  Went back to our place, crawled under the house to hook up the metal dryer vent hose and discovered a host of bugs, spiders and slugs living there.  Great fun!  I came out from under the house looking like the Mummy.
We struggled to get the vent hose hooked up to the dryer.  Didn’t want to go on.  After 30 minutes of cursing, we managed to get that attached.  Then we hooked up the water lines.  The “Y” adaptor barely fit onto the water tap.  Not very much room.  We then ran the hoses to the washer.  Nice and easy.
Then we tried to hook up the water line to the dryer.  The hose was too short!  AUGH!!!  So, off to Home Depot, again to try and find a longer water line.  Did you know that they don’t make longer than 5′?  We didn’t… But, I dug around their sale bins and managed to find a 6′ hose!  Hallulujah!  Alex won’t kill me now….  So, took it home and hooked it up.  It fit….. BARELY.
We then started our first load of laundry… All my clothes that I was wearing under the house went in…. We held our breath as the washer started up.  It spun, beeped, whirred, hummed and then as if by some miracle, water started pouring into the tub!  Eureka!!!  We have begun the inaugural washing process….
Alex still has to read the manuals, but, did you know the washer manual is 120 pages!!!!  Seriously????  120 pages!!!!  The dryer has a manual that is only a mere 80!
But, no matter, he will read them both because he likes to know exactly what each unit will do….
While he started the laundry, I finally managed to get in the car and head off to our condo to load up the remaining 2 aquariums.  A 3 gallon and a 23 gallon one. We were fortunate enough to have my coworker, Sebastian bring his father’s van on Saturday and we were able to move the 88 gallon tank and our china hutch.  Hooray!  I was seriously stressing about how we were gonna move that tank.  It is HUGE….
Back to my moving the smaller tanks.  In our 23 gallon tank, it is like Peyton Place by the Sea.  We started off with 3 pairs of guppies.  Those freakin’ things have never heard of Planned Parenthood.  I stopped counting at 120!  There was no way I was gonna be able to net all those fish out.  So, I drained the tank down to about 1 1/2 inches of water and then hoisted the whole thing onto a dolly, wheeled it down to the car and was able to shanghai a neighbour into helping me lift it into the back of the car.  Whew! The 3 gallon tank only held one goldfish and one snail, so again, I drained most of the water and hauled the tank down to the car.  Much easier to move that one.
Then, I began to stuff things in and around both tanks to act as insulation but also I didn’t want to drive back to the house with such a small load.  A waste of energy (both mine and the car’s).
I then began the perilous drive to Surrey.  Every bump in the road, every corner, every lane change and every red light made me practically shriek in fear.  I could see the water sloshing around the tanks and jostling the fish…. My biggest fear was to have the tank break in the back and have guppies flopping around…. Not a pleasant visual at the best of times….
After 45 heart pounding minutes, I made it home.  Alex helped me bring in everything and I began to get the tanks filled up, cleaned up, hooking up heaters, filters and lights.  The amazing thing is that everyone survived and the tanks look great in their new home…. Hallelujah!
Alex then showed me the results of the laundry.  Everything was clean, smelled great and didn’t look like anything needed ironing.  He was ecstatic.  That is until he got to the clothes I was wearing under the house.  The spider webs and slug snot were still adhered to my shirt, hat and jeans.  Whoddathunk that spider webbing was virtually indestructible?  But, they did come off when we started using a lint brush…. Whew!  I was worried that I was gonna look like Spiderman sneezed all over me….
More to follow…..

a somewhat erudite wannabe writer with aspirations of not putting people to sleep with my prose.... View more posts

One thought on “Washing machine blues”

This site uses Akismet to reduce spam. Learn how your comment data is processed.